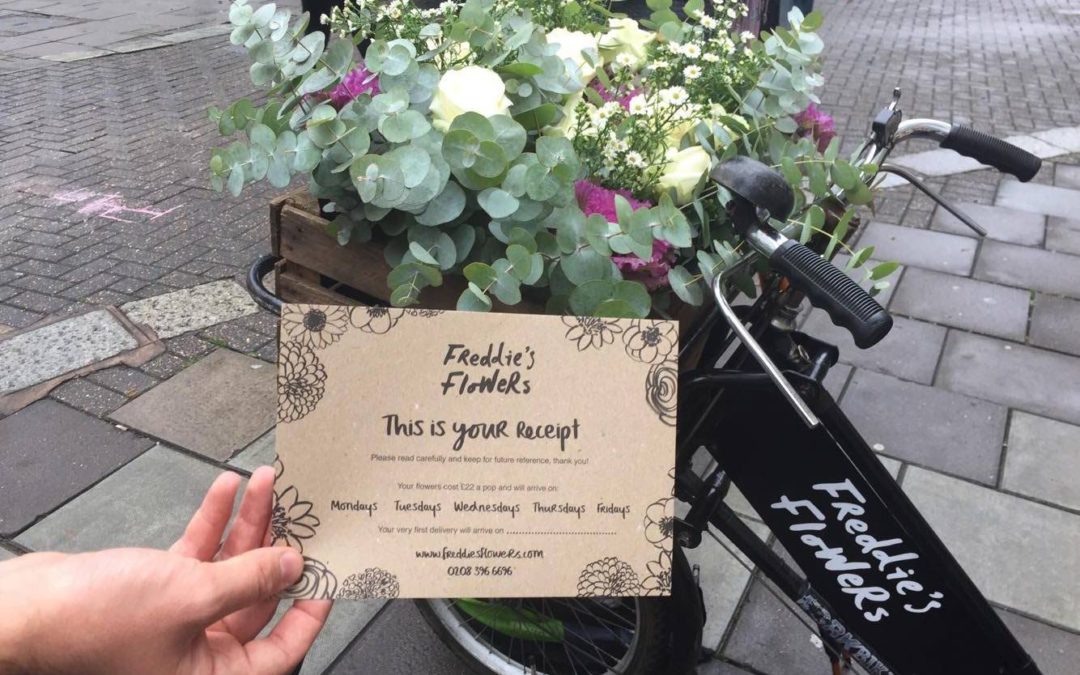 It was a shiny, bright October morning. Two ladies were happily trotting along the streets of Brighton. Shopping bags dangled at their wrists and they were happy. They had taken a day off from their usual responsibilities, and the shopping gods had been kind to them that morning in their quest for autumn boots and jumpers.

Suddenly a well-turned out (okay, attractive) and charming young man approached them.

“Yes?” they replied, hopeful that this young man was preparing to remark on how he wished they were single because, even though their emotional maturity hinted at their real age, he was sure they were actually 27.

“Er, yes.” They replied, slightly perturbed, and yet RELIEVED he wasn’t trying to sell them Sky TV subscriptions or busy being one of Lord Sugar’s apprentices…..

And, that was how my friend and I discovered Freddie’s Flowers.

Now. I’m not going to relay to you the details of how this AWESOME flower selling business works. They have a website for that and time is of the essence.

Suffice to say that this business has Marvellous Marketing nailed, because, it was so simple.

The charming young man (who wasn’t actually Freddie) and his lovely female colleague had set up a beautiful bike on the cobbles of Brighton. The basket of their bike was filled with very fresh, stunning flowers. Their logo was on the side of the bike – we instantly knew what their business was when we saw it.

They had a very simple subscription model, along the lines of Hello Fresh, and the way he explained it was SUPER clear.

They had selected a week day, in THE most salubrious street of Brighton to pitch their wares. The ‘week day’ part, in a shopping area, means that most of the passers-by are women (the average woman likes flowers more than the average man) and the ‘salubrious street’ part means that expensive shops are all around. People with money to spend on expensive clothes can also afford to buy flowers.

They had a story to tell about why they started the business, and a benefit-laden pitch to give us. The essence of which was that flowers sold in supermarkets (their main competitor) take a long and arduous route from grower to store. This makes them expensive to buy and past their best once they get to you. Freddie sends his flowers direct, so they are fresher – will last two weeks – and cheaper.

They had a simple, and very tight, design and tone of voice for their brand. Recycled brown paper and black cursive-lettered font. The flowers come with lots of extra bits and pieces, such as a description of what each flower is, where it grows and what it’s good for, step by step instructions on how to arrange your bouquet, etc. All the content written in a very warm, humorous and down to earth tone of voice.

Best of all, they were using a ‘dot-to-dot’ marketing approach, which I’ve outlined in a previous blog. I had already seen their advert on Facebook a few weeks before. But, that on its own wasn’t enough to make me sign up because various objections were raised in my head as I watched the video in the ad. These were covered off by the man during our chat. For example: what would happen if I’m not in when they deliver? How easy is it to cancel? What if I can’t make the flowers look as nice as Freddie does?

Now, there’s a good chance that you think I am a mug for signing up in the street to receive flowers. And, yes, I possibly am. But, on a personal level, flowers are a huge source of joy for me. They arrived on Monday and they are incredible. I might not be a Freddie’s Flowers customer for the long haul, but on a dank and dark November morning, to see a box of stunning flowers waiting in my porch is a little pool of sunshine.

And, with marketing this good. I HAD to give them a go.

If you enjoyed reading this Marvellous Marketing Spotters guide – why not check out other posts in the series. Here’s one to get you started.

How To Speak So Google Will Listen. Why ‘On Page’ SEO Matters.

How Can You Write Copy That Appeals To The Correct Audience For Your Business?

Looking for something specific?